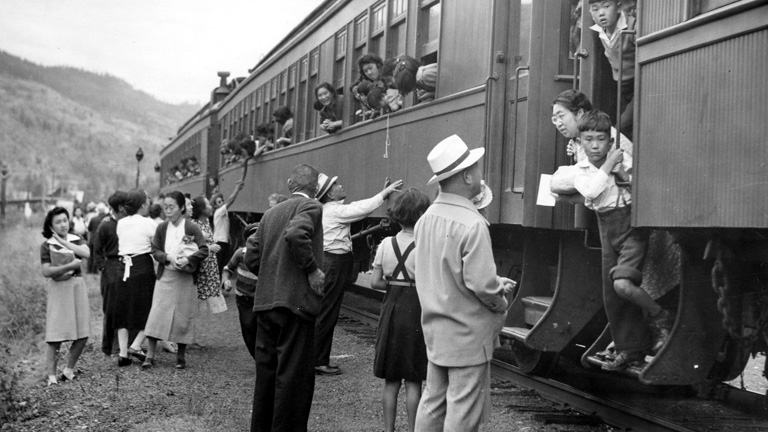 (photo: Displaced Japanese Canadians leaving the Vancouver area (possibly Slocan Valley) after being prohibited by law from entering a “protected area” within 100 miles of the coast in BC. (l-r: woman holding book is Nobuko Morimoto; woman in dark cardigan is Tei Terashita; young woman leaning out of train is identified as Kazuyo Kawabata).  Image provided courtesy of NNMCC.)

In 1942, as World War II raged on overseas, the Canadian government enacted the Defence of Canada Regulations to forcibly remove and relocate over 22,000 Japanese Canadians living on BC’s coast. At first told by government officials that their property and belongings would be kept safely, the displaced families soon found out this was not the case; properties were looted, and land was given away or sold. In 1949, when Japanese internment in Canada officially ended, tens of thousands of families were left with next to nothing.

Broken Promises examines this dark time in Canadian history through the stories of seven Japanese Canadians and explores life for Japanese Canadians in Canada before war, the administration of their lives during and after war ends, and how legacies of dispossession continue to this day.

Grounded in research from Landscapes of Injustice – a seven year, multi-disciplinary, multi-institutional, community engaged project, this exhibit illuminates the loss of home and the struggle for justice of one racially marginalized community. Broken Promises is the product of a new, highly innovative way of learning and teaching a history of injustice that enables those with lived experiences to tell their own stories in a way that speaks to a broader, collective history.

“Asian history and heritage, and Japanese Canadian history specifically, is important and relevant here in the Kootenays, as elsewhere, due to the pronounced but often unspoken impact of these cultures to communities that were built and informed by people who were ill-served, obscured, and devalued by settler cultures in myriad ways,” says Curator Arin Fay. “Japanese internment camps are one example of this, and the Broken Promises exhibition and educational offerings will help highlight and disseminate this history.