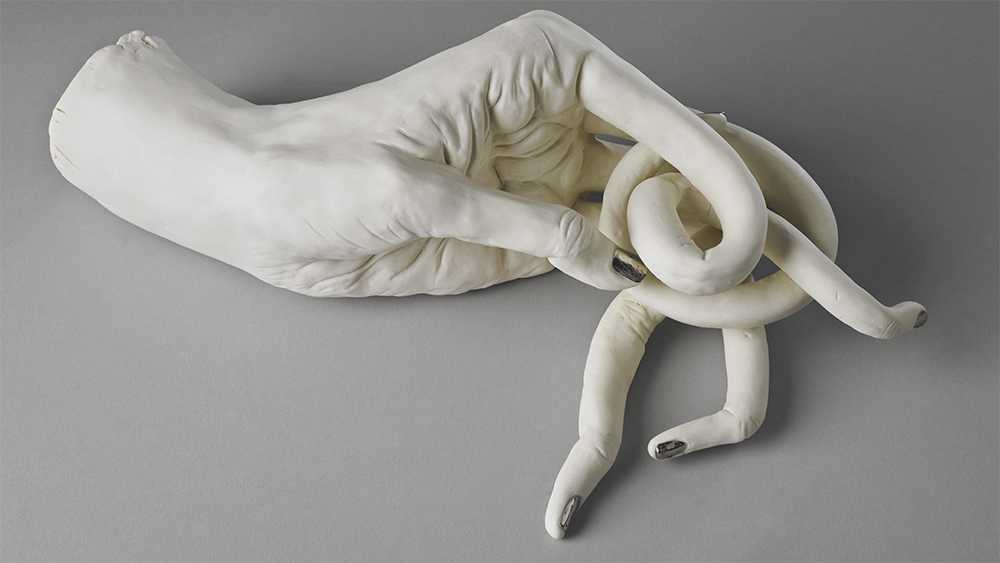 There may be few common threads between the artists showcased in THROWN, the latest group exhibition opening at Touchstones Nelson Museum, but one thing they all share is a love for ceramics.

TAKE A 3D TOUR OF THE EXHIBITION

The show, which runs March 13 to May 29, is a group exhibition featuring a diverse cross-section of artists from across the country, all of which offer a distinct and exemplary approach to ceramics. Featured in the show are Samantha Dickie, an abstract assemblage artist from Victoria, BC; John Kuroc, an artist from Rankin Inlet, Nunavut, specializing in hand-built forms; Shary Boyle, an artist of many mediums who explores the fantastical potential of the human form; Jody Greenman-Barber, whose delicate works find inspiration from dance and movement; Sergio Raffo, a Kaslo resident of Cuban origin who works in both human and architectural forms; Robin Dupont, a specialist in atmospheric firing techniques and a skilled kiln-builder; and Rory Macdonald, an artist and professor at the Nova Scotia College of Art and Design, whose work blurs the line between installation and intervention.

“These types of medium-centric group exhibitions create an opportunity for a rare form of dialogue amongst the participating artists, even in times when active mentorship and collaboration are not possible, as the respective works speak so strongly of perspective and means and method,” says Touchstones Nelson Curator Arin Fay. THROWN, Fay explains, is the second iteration of an ongoing series of medium-centric exhibitions which was inspired by Lost Thread, a well-received group textile show mounted in 2018 which highlighted six textile artists from across the nation, but with a very specific focus on regional Kootenay artists, and with “the same eye to diversity of expression and methodology,” she adds. “This formula of curating exhibitions gives us the opportunity to include ‘our’ artists in wide-ranging cultural and creative conversations, within a Canadian context.”

This project is being supported through a Canada Council grant and has partnered with Selkirk College and Medalta in Medicine Hat. This exhibition project will support a tour to Medalta in the Summer of 2021, a publication, and online programming.

John Kurok – The Winnipeg Art Gallery mounted a major exhibition of Rankin Inlet Ceramics in the Spring and Summer of 2003. John was one of the six participating artists in that prestigious showing. His works were included in the exhibition held at the Cerny Inuit Collection in Switzerland, at Nunavut-wide arts festivals, in several showings at the Legislative Assembly, and featured in publication like the Inuit Art Quarterly, and Ceramics Monthly Magazine. In 2006, his works were on display at the Canadian Clay and Glass Gallery in Waterloo and in 2008, he was part of a group exhibit of Rankin Inlet Ceramics at the National Gallery in Ottawa. He continues to be collected and displayed around Canada.

In the Summer of 2016, John was invited to the Medalta Pottery Artist in Residence Program. The work that was produced became part of a show at the Esker Foundation Gallery in Calgary, Alberta in January, 2017.

Situated on the west coast of Hudson Bay, Rankin Inlet (Kangiqliniq in Inuktitut) has been home to such master stone carvers as John Tiktak (1916–1981) and John Kavik (1897–1993), both acclaimed for their powerful, minimalist renditions of the human form. This Nunavut community is also the site of a unique ceramics project that has its roots in the 1960s. More recently, the Matchbox Gallery has reawakened interest in this project in exhibiting hand-built clay works by established and emerging artists such as Yvo Samgushak (b. 1942) and John Kurok (b. 1977).

With much thanks to Jim and Sue Shirley, Matchbox Gallery

More on John Kurok from the Inuit Art Foundation

Jody Greenman-Barber has a BFA (1998) and MFA (2016) in ceramics from the University of Regina.  Inspired by contemporary dance and improvisation, her expressive and animated ceramic sculptures record and convey the essential feeling of embodied sensations in forms that derive from pottery concepts and methodologies.  Her interest in performance and dance, inherent in the making of ceramics, has led to explorations and collaborations with photography and film making.  In 2010, her short film Clay Play was screened with Ateliers d’Art de France 7th International Film Festival on Clay and Glass with additional screenings at the Centre de Ceramique Contemporaire de la Borne, and at Malicorne Espace Faïence in Malicorne-sur-Sarthe, France.  Throughout her career, Greenman-Barber has participated in residency programs including the Medalta International Residency program in Medicine Hat, Alberta and the International Research Centre for Ceramic Arts at the Guldergaard in Skaelskor, Denmark.  Jody has received numerous grants, scholarships and awards including the Saskatchewan Innovation and Opportunity Graduate Scholarship and runner up for the Winifred Shantz Award for Ceramics in 2014.  In 2015 one of her sculptures was selected for the 2015 Gyeonggi International Ceramic Biennale competition in Icheon, Korea.  Jody Greenman-Barber resides and works in Buena Vista, Saskatchewan.

Robin DuPont, is a ceramic artist and educator specializing in atmospheric firing techniques. His work is an inquiry into the ceramic process and the relational aspects of useful objects.

Having travelled extensively to teach, build and fire kilns across North America and abroad, Robin maintains a studio practise in the Slocan Valley, outside of Nelson BC, where he has researched and built multiple kilns on the property for the purpose of exploring the potential of atmospheric kilns as mark-making tools that reveal the process.

With a Masters Degree from Utah State University, his professional development also includes apprenticeships, artist in residencies, several research and work studies in Canada, the USA, Australia and Korea. Robin has led residencies at the Banff Centre for the Arts and Medalta International Ceramics Residency. He has taught ceramics at Utah State University, the Alberta University for the Arts, University of Manitoba and is currently faculty at Kootenay Studio Arts – Selkirk College in the ceramics department.

His work is exhibited in galleries and collections across North America.

Samantha Dickie is a Vancouver Island based ceramic artist, focused on creating both minimalist abstract sculpture, and multi-component works for architectural-scale installation and public exhibition.  Following a Bachelor of Arts degree from Trent University, she completed a Diploma in Ceramics from the Kootenay School of the Arts.  Over the past 18 years, her practice includes attending various residencies in Canada and abroad; receiving national and provincial grants to create large-scale conceptual projects for exhibition in public galleries across Canada, as well as teaching workshops and presenting at provincial conferences.  Her work can be found in permanent collections in Victoria BC, Nanaimo BC, Burlington ONT, and Boston MA.

More on Samantha Dickie from Ceramics Monthly by Kimberley Hyatt

Shary Boyle is exhibited and collected internationally. She has performed at the Brooklyn Academy of Music, NY (2008), The Hammer Museum, LA (2006) and the Olympia Theatre, Paris (2005), and her work has been included in the National Gallery of Canada’s previous three Canadian Biennales. In 2016 she exhibited in Ceramix : Ceramics and art from Rodin to Schutte, organized by the Bonnefantenmuseum in the Netherlands and travelling to La Maison Rouge in Paris, and Cite de la ceramique in Sevres, France. In 2017, Boyle co-curated and participated in the Esker Foundation-produced touring exhibition Earthlings, her sculptures were featured in South Korea’s Gyeonggi International Ceramic Biennale, and the Phaidon, UK publication Vitamin C: Clay and Ceramic in Contemporary Art. Shary Boyle is the recipient of the Hnatyshyn Foundation Award and the Gershon Iskowitz Prize. She represented Canada with her project Music for Silence at the 55th Venice Biennale in 2013.

More on Shary Boyle from the Gardiner Museum

Sergio Raffo graduated with a MFA from the National Academy of Fine Arts, San Alejandro, Havana, Cuba with a major in Ceramic Sculpture and Technology. He also received a diploma in General Chemistry from the “Instituto Politecnico Jose Antonio Echeverria”, Havana. From 1998-2004, he was a professor of Ceramics at the “Instituto Superior de Arte” (ISA), University of Havana. He is founder of the Experimental Ceramic Studio at the ISA. He is director of the project, “Barro Espiritual”, which is a group of professors and students whose objective is to develop the application of contemporary ceramics within the urban landscape. From 2004-2005, he was an artist in residence by invitation at the Masters Sculpture Dept., Concordia University, Montreal, Quebec. Sergio is winner of various national and international prizes for large-scale ceramics works. His pieces can be found in the National Museum of Cuba, as well as galleries and private collections internationally.

“Somewhere between water, earth and fire exists the limitless potential of clay.

The artists contributing to THROWN represent ceramics through a diversity of means and method, perspective and scale, and from across the geography of Canada. The reverence and offering of Robin DuPont’s cups and stools; the impossible architecture of Jody Greenman-Barber’s akin to kinetic sculptures that dance shadows on the wall; the figurative phantasm of Shary Boyle’s silver polished study of perfectly articulated unease, John Kuroc’s anthropomorphic burnished urn, the repose and human scale of Sergio Raffo’s Absence; and the ethereal, spatial disruption and augmentation of Samantha Dickie’s Drop. There is a vast distance travelled, if you follow the gaze and trajectory of every piece, intention, emotion, and the frozen fluidity of the work.

The physicality of ceramics is felt in the spaces both within and between these works, the pull and push and plasticity, the weight and balance of self-standing infrastructure, the risk of rise and fall, the whirl of centrifugal force. The privilege of medium-centric group exhibitions such as THROWN is a gamut of perspective as opposed to a single one; a range or visual study of commonality, difference and divergence.

There is a somewhat unresolved relationship within many artistic disciplines and mediums, ceramics included, a sense that the divide between art and craft, expression and utility, is an insurmountable divide, a creative chasm uncrossed. This idea has been addressed within the THROWN exhibition by a diversity of expression and a recognition / erasure of the aforementioned divide. Robin DuPont’s spine of stools down the centre of the room, which in a very deliberate but symbolic sense, grounds the body of the exhibition to the room and each component part. There is a communion in this arrangement, an even ground where all forms are celebrated and connected. Curator Carol E. Mayer writes about the extraordinary exhibition Playing with Fire that “…the artists defiantly and boldly challenge the notion that all things made of clay are required to be functional; in their works, clay is released from this constraint and elevated into extraordinary works of art.” Rachel Gotlieb describes this as “releasing the medium from the tyranny of function” (Contemporary Ceramics, The Canadian Encyclopedia). And while there is truth in these statements there is equal truth in the celebration and perfection of form, the recognition of component parts that create the whole, breaking free of all boundaries that constrain creativity.

Plastic art forms, such as ceramics, or any art forms that involve manipulation, both honour age old forms as well as explore the potential parameters of where the medium can and will go. By finding the limits and also recognizing the roots, artists contribute to an endless legacy of discipline and departure. The archaeological expanse, from time immemorial to present day, illustrates all manner of vessel and shard. The constituents of civilization and the creations and contributors of/to culture, illustrate who we are and were in the same way that figurative and architectural embellishment and abstract forms, from minute to massive scale, do.”