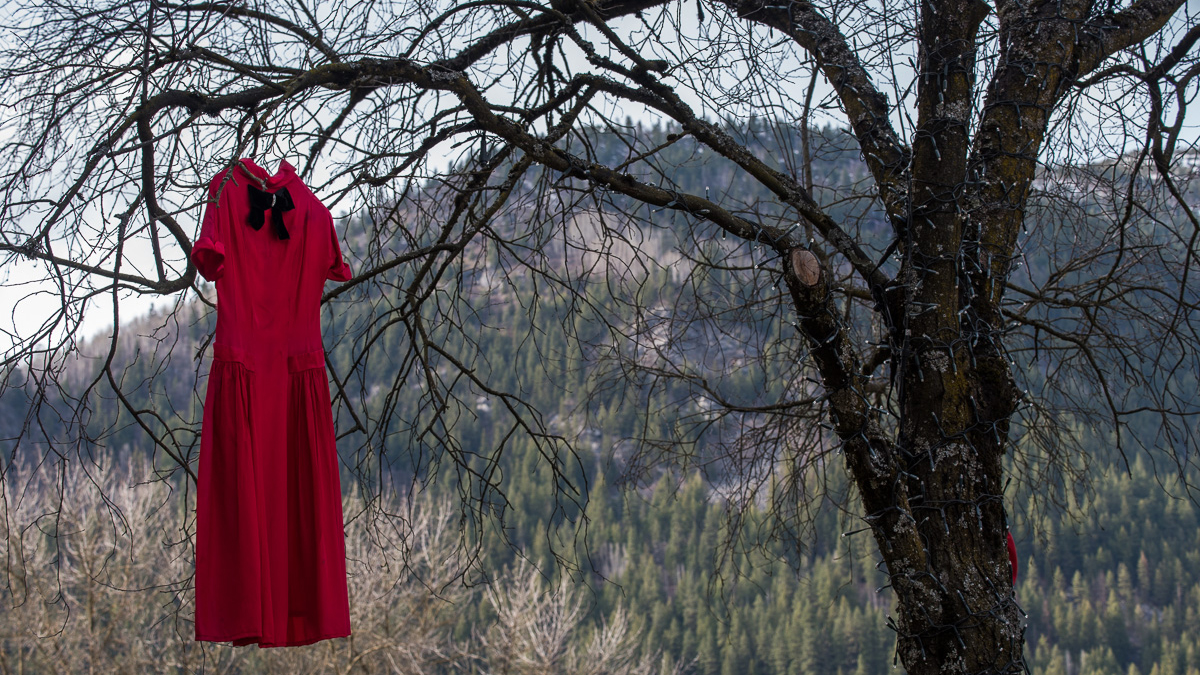 Indigenous women face higher rates of violence than any other cultural group in Canada and the United States. Indigenous families and communities have been advocating for generations to make changes to the colonial system that often treats the perpetrators of the violence with impunity.

The REDress Project, a public art installation created by Canadian artist Jaime Black, works to create space for families of MMIWG (missing or murdered Indigenous women and girls) to tell their stories and to lend support in the struggle to protect their loved ones. The REDress Project is being shown at both Touchstones Nelson: Museum of Art and History, and the trees outside of Nelson City Hall, from February 27 to May 29, 2021.

“Indigenous women are the heart of our cultures and communities across Turtle Island; for thousands of years women were at the centre of the circle, creating balance and harmony in our communities,” says Jamie Black in an artist statement. “Since the onset of colonization women and girls have been especially targeted as a way of breaking apart communities and erasing culture in an effort to assimilate Indigenous ways of being. The REDress Project calls in the spiritual power and presence of our ancestors, as well as the spirits of those who have gone missing or been murdered. The REDresses stand with us as we reclaim our circles, reclaim our voices and re-imagine what it means to move forward in a good way.”

“Touchstones Nelson is proud to present this project, both in the public sphere and in our gallery space,” says Astrid Heyerdahl, Executive Director of Touchstones Nelson. “This project is supported by our ongoing partnership with the West Kootenay Métis Society, community partners, and artist Jaime Black. Funding through the British Columbia Arts Council has made this project possible, and we thank the City of Nelson for permission to use City public space.

“We hope that this important work will generate further conversations about the ongoing tragedy of Missing and Murdered Indigenous Women and Girls and the importance of meaningful Truth and Reconciliation,” Heyerdahl adds.

Jaime Black’s work has been exhibited in several locations in Canada and the United States since its inception in 2011, including: The Manitoba Legislature, University of Ottawa, Smithsonian’s National Museum of the American Indian, and a permanent exhibit at the Canadian Museum of Human Rights.

The REDress Project is curated by Arin Fay w/ facilitation and support from Lesley Garlow, Indigenous Educator and the entire Touchstones team.

This project is supported by our ongoing partnership with the West Kootenay Métis Society, community partners, and artist Jaime Black. Funding through the British Columbia Arts Council’s Youth Engagement Project Funding (YEP) has made this project possible, and we thank the City of Nelson for permission to use the public space in front of City Hall for the offsite installation of the REDress project.

Thanks also to Adam O. Thomas for the work on the video project and the contribution of the artist and Shelly Boyd, Arrow Lakes Facilitator at Colville Confederated Tribes. The music on the video was generously contributed by: Loscil and The Cyrillic Typewriter.

Special thanks to the Capitol Theatre for the loan of red dresses for the Gallery B installation.

The exhibition discusses serious and upsetting subject matter, and may be triggering for some members of the community. If you need support, please reach out to the local organizations listed below:

The REDress Project was featured in Vogue! Read the article here