As Immense as the Sky 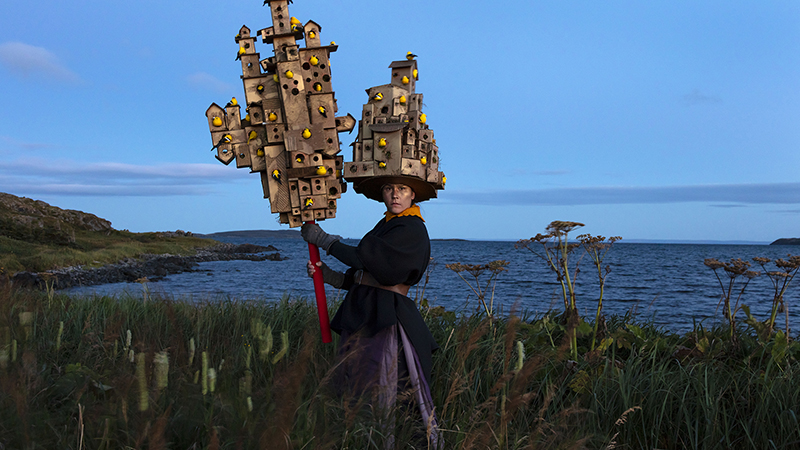 as immense as the sky

A single subject, dressed in ornate costumes or wielding intricate, handmade props, stands alone in a vast, empty landscape. It feels dreamlike, otherworldly, magical. From the shores of Newfoundland to the Saskatchewan prairies and between, Canadian artist Meryl McMaster seeks out these desolate places and poses her lone model for her photography series As Immense as the Sky, which is being shown this fall at Touchstones Nelson Museum.

Along with the oversized photos, McMaster has also written poems to coordinate with each image. McMaster, who has both European and Plains Cree ancestry, uses her work to ex-plore the two worlds in which she lives. She develops a relationship with the land and the past, and uses her models, props, costumes and makeup to tell a story of her exploration.

“Many places I visited hold particular meaning for my direct ancestors as they are sites of significant moments in their lives;” McMaster says in her artist statement. “I was drawn to the sites of ancient stories across central and southern Saskatchewan and to the shores of early settlement in Ontario and Newfoundland. My aim was to reconnect with those who came before me as a way of introducing myself to the land on which they lived.”

Meryl McMaster was born in Ottawa, Ontario in 1988. She earned a BFA in Photography from OCAD University in Toronto, Canada (2010). Her work has been exhibited at the National Gallery of Canada, Art Gallery of Ontario, Montreal Museum of Fine Arts, the Smithsonian’s National Museum of American Indian, and more. Her awards include the Scotiabank New Generation Photography Award (2018), REVEAL Indigenous Art Award (2017), Eiteljorg Contemporary Art Fellow Award (2013), Charles Pachter Prize for Emerging Artists (2012), Canon Canada Prize (2010), OCAD U Medal (2010) and the 2016 Sobey Art Award long list.