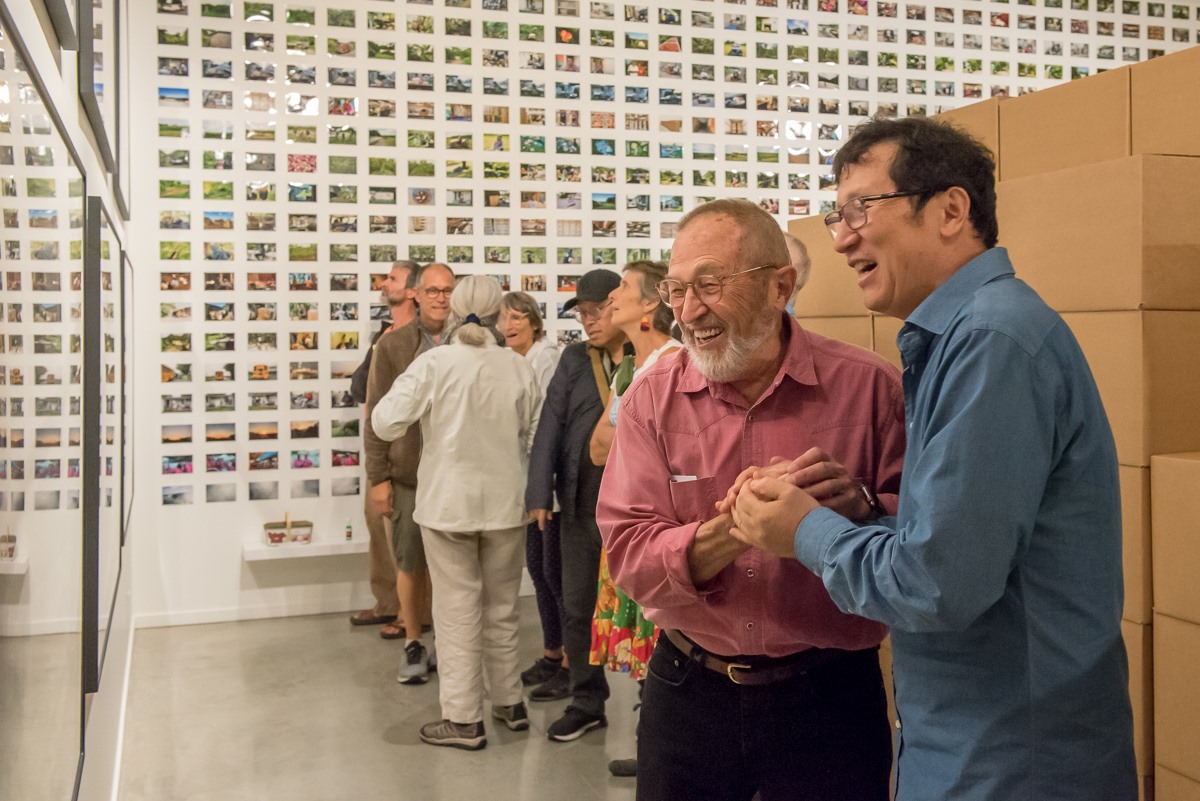 Above: Gu Xiong (right) talks with Fred Wah at the opening of The Unknown Remains, August 2019.

In 1919, Charles Bing bought a Ford truck to deliver fruit and vegetables from his farm at Willow Point to many restaurants in Nelson and mine sites in the surrounding area. Ninety years later, multidisciplinary artist and UBC Professor Gu Xiong photographed the same truck at the farm, which is still owned by Bing’s great-granddaughter.

“The memory of him is still there. The objects, whatever this person still used is still there, so the man is still there. I found that quite interesting,” Gu said in a phone interview from his campus office. He is busy preparing for his upcoming exhibition, The Unknown Remains, which is showing at Touchstones Nelson: Museum of Art and History, and explores patterns of global human migration and capitalism through a local Kootenay lens.

The exhibition runs August 24 to November 3, with an opening reception and artist talk at 7 pm on Friday, August 23.

Bing Farm will be featured in the archival portion of the show in Gallery B, alongside the Chinese cafes and laundry, and Nelson’s Chinatown. Images of Chinese immigrants from the Shawn Lamb Archives, the Revelstoke Museum & Archive and the Royal BC Museum will mingle with the photographs Gu took while visiting Nelson in June, and the poem carved on the stone at the top of Hall Street (the original Chinatown) will be translated and showcased on the wall. Also included will be charcoal on canvas drawings and illustrated sketch books.

In addition to spending time in the archives, Gu relied on interviews with local Chinese community members, historians, and many old newspaper issues. “[The newspapers] shared the immigrants stories from a hundred years ago to now, and little by little you can see a bigger picture of Chinese immigrants in Nelson,” he said. “When Chinese people originally came here it was for labour positions, but now there are lots of Chinese immigrants who work for Environment Canada for the research centre who are newly arrived form China, from Hong Kong, who live and work in Nelson, they are educated people who have skills and come to work as skilled workers,” he added. “It shows the times have changed.”

In stark contrast to the archival show is the massive container ship Gu is reconstructing out of 1,500 cardboard boxes in Gallery A, alongside thousands of portrait photos of immigrant workers across Canada. Both the ship and images represent globalization, immigration and consumerism of the past and present; it is at the same time widely demonstrative of the current societal state, and a deeply personal reminder of Gu’s own story as a landed immigrant from China.

Gu was born in Chongqing, Sichuan, China in 1953 and at age 17 was sent to a labour camp, where over the next five years he honed his drawing skills by filling sketchbooks  – some of which will be displayed in Gallery B – with scenes of rural life. He immigrated to Canada in 1989 after a successful year-long residency at the Banff Centre for the Arts, just months before the political turmoil in China bubbled over, eventually leading to the Tiananmen Square Massacre.

Much like the subjects of many of his works, Gu found himself as a landed immigrant in Canada, with a BFA and MFA from his home country, and working low-paying, general labour jobs. It was while bussing tables at the UBC cafeteria that he created his well-known series of crushed Coke can paintings that were displayed in a gallery in Vancouver, kicking off his art career in Canada. Although it was a difficult road, Gu knows he made the right decision to immigrate to Canada. “Canada is a good place for me to express my ideas through art and share it with other people,” he said, “which is very important to me.”

The Unknown Remains ran August 22 to November 11 in both Galleries, with an opening reception and artist talk at 7 pm on August 23. This exhibition was made possible by the generous support of the Canada Council. For more information visit www.touchstonesnelson.ca.

The Unknown Remains art book was published in the Summer of 2020, the year after the Gu Xiong exhibition of the same name occupied both gallery spaces at Touchstones Nelson Museum of Art and History. Gu Xiong’s practice centers on the creation of a hybrid identity arising from the integration of different cultural origins and migrations. His work encompasses sociology, literature, geography, economics and politics, as well as the dynamics of globalization, through which he constitutes an amalgamation of multiple cultural histories and seeks to create an entirely new identity. The art book is a testament to the complexity and relevance of this artists’ work, and while the themes are global in nature, the work and writing places Nelson, British Columbia within the context of larger global patterns, illustrating the microcosmic relevance of all places,  people and history. The book includes writing and poetry by Gu Xiong, an extended essay/history by Andrew Hunter, a curatorial essay by Curator Arin Fay and an intro by Astrid Heyerdahl, Touchstones Executive Director.