A touchstone is an ancient device for testing the purity of gold or silver alloys. The amalgam is drawn across (touches) this fine-grained dark stone and the colour of a resulting mark reveals quality. From this practical use, a metaphor arose: a touchstone is a criterion by which excellence is recognized. The name, Touchstones Nelson, acknowledges our mining past, our fine stone building, and the excellence of our offerings.

The new name does not replace the official name of the society: the Nelson and District Museum, Archives, Art Gallery and Historical Society (MAAG). The latter will continue as the name of the organization that operates Touchstones Nelson.

Touchstones Nelson serves as the cultural touchstone for Nelson and District. As the Society’s vision statement notes: “a vibrant, community-based organization dedicated to being a significant cultural anchor for the Nelson district of British Columbia.”

Touchstones Nelson is located in one of Nelson’s most significant buildings. The lot, situated on the southeast corner of Ward and Vernon Streets, was purchased by the Federal Government for $11,000; in 1902 the building was constructed as a facility for the Postal, Customs and Inland Revenue services. This composite Chateauesque-Richardsonian Romanesque style building attractively combines granite, Kaslo marble, local common brick and pink brick from Spokane, Wash.

Nelson was in a period of rapid growth early in the 20th century and soon the building proved inadequate; additions were made to the rear in 1910 and 1939. Despite these, increasing demands on the facility soon required even more capacity. In 1962, the problem was solved when a new larger Post Office opened adjacent to the 1902 structure. Meanwhile, City government, which had been looking for a new home, took over the old Post Office.

In the beginning, the building now housing Touchstones Nelson served multiple functions. At that time it served as a Post Office as well as a Customs and Inland Revenue House. The present diversity of offerings continues that tradition as Touchstones Nelson now serves as a museum, archive, and art gallery.

The history of Touchstones Nelson: Museum of Art and History (Nelson and District Museum, Archives, Art Gallery and Historical Society) began in 1955 when the Kootenay Museum Association was formed. The museum had a number of locations over the years including the former Post Office in the 1950s to an abandoned brothel on Lake Street. In 1971, a new building at 402 Anderson Street was constructed with funding from the British Columbia Centennial of Confederation. At that time there were no funds for the construction of an art gallery. The museum opened there in 1974.

After the closure of the David Thompson University Centre and its art gallery in 1984, the museum opened the Mildred Erb Gallery. In 1994, partial operating funds were secured from the provincial government, followed by similar funding from the City of Nelson, and these enabled the hiring of one staff member.

In 2000, the Kootenay Museum Association officially changed its name to the Nelson and District Museum, Archives, Art Gallery and Historical Society (MAAG).

Since 1994, the Society had been seeking a larger and more centrally located facility. The quest culminated with the Society’s 2006 opening of Touchstones Nelson in the (now) renovated heritage Post Office in which life had begun some fifty years earlier.

To be a cultural hub that provides integrative art and regional history programs to encourage new perspectives and foster a collaborative community.

Chiseled in granite, the construction date is clearly visible high on a dormer above Ward Street. Touchstones Nelson Collection 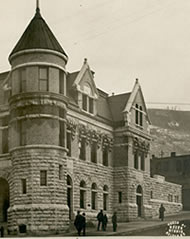 502 Vernon Street around 1910 when the building was used as a Post Office and Customs House. Touchstones Nelson Collection

The building’s past is written on its walls. Touchstones Nelson Collection

The Customs House was in back of the Post Office. The building continues to serve multiple functions. Touchstones Nelson Collection

This former brothel was home to the Society from 1960 to 1971. The Society’s next home was located at 402 Anderson Street in a new building constructed in 1971 as a British Columbia Centennial of Confederation project. Touchstones Nelson Collection 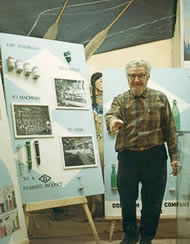